Roundabouts: Helping the world go round

Designed to accommodate vehicles of all sizes (including emergency vehicles, buses, farm equipment, and semi-trucks with trailers), roundabouts are circular intersections that direct travel counterclockwise around a central island. They have no traffic signals or stop signs—just a steady flow of traffic that entering drivers yield to.

Quickly increasing in popularity throughout the US, roundabouts have been known to strike anxiety in the hearts of travelers who still find them unfamiliar, but drivers tend to come ‘round (pun intended) once they experience the myriad of benefits roundabouts provide. Below are just a few of the powerful reasons we’ve learned to love roundabouts, along with ways they’ve helped our clients overcome challenges and why you’re likely to see more of them cropping up near you.

The circular shape of a roundabout is designed to reduce speeds to 15 to 20 mph and control the direction of traffic. Studies have shown that the low travel speeds, one-way travel, and continuous flow of traffic reduce overall collisions by 37%, collisions resulting in injury by 75%, and fatal collisions by 90%.

Because their design virtually eliminates high-speed right-angle or head-on collisions common in a traditional intersection, collisions in a roundabout tend to be far less serious.

As an example, on Jackson School Road in Washington County, Oregon, we designed an expandable (one- to two-lane) roundabout to replace a rural four-way intersection that had a high crash rate and was over capacity during peak use. The meandering approach to the intersection encourages drivers to slow down before entering the roundabout, drastically reducing opportunities for serious crashes.

No, it’s not a crop circle—it’s the Jackson School Road roundabout at the intersection of Scotch Church and Meek Roads in Washington County, Oregon! 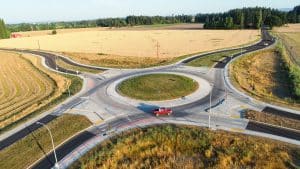 Roundabouts slow drivers down and allow vehicles to move freely through an intersection more quickly and with less congestion on approaching roads. For this reason, roundabouts can be the perfect solution to an intersection that is over-capacity at peak travel periods.

Consider the 51st Street and IH 35 interchange in Austin—the first roundabout on an interstate frontage road in Texas—for which we provided traffic analysis and modeling. Before the intersection was reconstructed as a roundabout, this segment of IH 35 was ranked third on Texas A&M Transportation Institute’s Top 100 Most Congested Corridors in Texas list. Recent data shows that eastbound traffic is moving three times faster than before the roundabout opened!

According to the Federal Highway Administration, the reduced vehicle delay in a roundabout may also reduce emissions with fewer cars idling and polluting.

While the cost of construction is comparable to a traditional intersection, roundabouts may be a lower-cost option in the long term as they eliminate hardware, maintenance, and electrical costs associated with traffic signals. Plus, they’re totally immune to cyber-attacks.

When the City of Redmond, Oregon, needed a cost-effective intersection solution that could handle the future traffic from upcoming development, the City asked our team to design this “mini-roundabout” at S. Canal Boulevard and SW Pumice Avenue. Its compact footprint reduced right-of-way needs—and minimal re-work over a newly paved section of roadway—thereby reducing project cost, while improving safety and reducing intersection delays.

A roundabout may need more property within the intersection but often requires less space on the streets approaching the roundabout. Because roundabouts can handle greater volumes of traffic more efficiently, they often don’t need as many lanes for waiting vehicles as a signalized intersection does.

We designed two roundabouts for the City of Melbourne, Florida, as part of their Hickory Street Complete Streets program. The nature of this traffic calming development at the entrance of the hospital district was to prioritize pedestrian movements while slowing vehicle speeds. By using a smaller diameter roundabout, we were able to work within the existing right-of-way and reduce impacts to surrounding infrastructure.

Though not a one-size-fits-all solution, roundabouts have demonstrated advantages, and considering one at new or existing intersections may offer a suite of benefits over a traditional configuration. We’ll close with a quick reminder on how to use a roundabout: